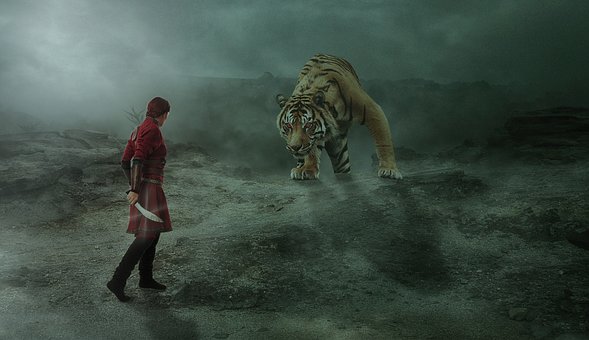 I just watched a video of a woman who has panic disorder and got a service dog for it.  Now, I have no problem that she got a service dog, but I kept thinking “She doesn’t know that she doesn’t have to rely on a dog to get over her problems.  I could teach her proper breathing so that she never has another panic attack in a matter of minutes!”.

I felt sorrowed for her, but also shook my head at the lack of logic:  The dog cannot stop a panic attack, he emits no medicine.  He can’t stop any of the bad things she is worried about.

So why does the dog “work” for her?  It’s not that he is that good; it’s that she simply is not succumbing to old thought habits because she focuses on her dog, not herself.

But she can get that freedom  without the dog.  The dog is simply a talisman for her, a teddy bear.  He is not her ears, as in a service dog for the deaf, nor her eyes as in a seeing eye dog.  He is not even warning her of upcoming epileptic seizures, like some service dogs.  He is providing a service of something that she could learn how to do herself.

That is not a criticism at all.  I didn’t know that I could do this for myself either.  We are not taught that a panic attack is merely fight or flight at the wrong time.  We aren’t taught how to organize our thoughts, or how to value rational thought over hysteria.  In our society, hysteria is rewarded, and rational thought is dismissed.  She didn’t know, and that makes me sad.

I thought about how she might react if I had the opportunity to teach her how to work with the way the Lord created her body so that she wouldn’t have panic attacks ever again.  I imagine she would be upset, as I was when people tried to tell me I “just needed to quit doing this”, and how I have seen others react in anger when help in getting over anxiety disorder was offered.  I remember one woman telling me that she has been so angry with me when I had offered that she could learn to work on her anxiety.  She felt it unfair, but she started working on her anxiety with tips that the Lord gave me, and she found that the Lord did lead her through.

One of the biggest obstacles that anyone will have to overcome with an anxiety disorder is the idea that they “just can’t help it”.  In fact, when people are told there is a way to get better, that there are things they need to do, sometimes they react in anger and defensiveness.  I did.

It’s understandable in a way.  First of all, it feels so strong that we can’t help it.  It feels like there is no way we can fix this.  We get irritated with “healthy” people who try to “lecture” us on what we should do.  We might feel guilty, or like we are being picked on or condemned.

Also, we as a society very much buy into the concept that “if it’s a disorder, the person is not responsible”.  Much destructive behavior is excused because the person has “a disorder”.  We, as a society, think if we call something a disorder, then we don’t have to take responsibility for it.  We are absolved of responsibility.  That’s very much relieving, but it also leaves us angry when someone tells us that we can fix our problems.  We might feel foolish or overwhelmed.  We might stomp away in a huff.  We might be afraid that our loved ones will find out, and then the pressure will be on us to “fix it”.  We will be under a microscope while we muddle through with this disorder that we did not want in the first place, under pressure and judgment.

However, please let me tell you now not to let your thoughts go down that path.  The knowledge that there is something you can do about your disorder is good news.  That means you do not have to suffer any more.  It means that you can find healing and peace.  No more hiding in the house, no more panic attacks.  This is a good thing.  This will help you find the “you” that the Lord created you to be.  You will find peace and joy in that.  I promise.

Now, what about our “disorder”?  May I offer that we change that from “I have a disorder” to “I am disordered”?  Your mind is like a severely cluttered house.  There is no reason why the house must be cluttered, it is just in disarray.  However, when you start putting order in your mind, when you start getting rid of the trash, organizing your thoughts, getting rid of the “dust bunnies” of old memories and fears, start working on the house, instead of letting the clutter just “happen”, you will find that you are no longer disordered nor plagued by a “disorder”.

It is rather like a person who, through no fault of disease, simply eats too much.  If someone is overweight and are eating the proper amount of calories and getting enough exercise, then they might have a disorder, perhaps something wrong with their endocrine system.  My friend required thyroid surgery and gained a great deal of weight, though she ate properly and exercised.  She had a disorder.  Once they got the disorder under control, her weight went back to normal.

However, someone who is overweight because they deliberately eat 3,000 calories more a day than they are supposed to, has to take responsibility. They are not ill, they are not forced to eat, they just allowed their eating to get control, instead of controlling their eating.  They do not have a disorder, their eating habits are disordered.  That would be me.  The times that I have had weight issues were not like my friend’s weight issues.  I did not have a thyroid problem, I had a self control problem—I didn’t control myself.  I did not have a disorder, I was disordered in my eating habits.  There is a difference.

(Now, please let me take a moment to say:  if you are overweight as well, do not take this as a criticism.  I know that problems I have had with weight were because I was disordered in my eating (which is why I used that example!), not because I have a disorder of my thyroid or liver or took medications that caused weight gain, which you might have.  However, this is a good illustration of what the difference is between having a disorder, and being disordered.  If overeating is a problem for you, may I suggest that, as you learn peace and draw closer to the Lord, He will help you with that problem too.  Do not become overwhelmed, He will help you through every issue you have.)

Now, what does the Word say about order?  Interestingly, the Lord talks about order.  Though the Bible is referring to order during worship, read this quote:

The word used for both disorder and confusion is akatastasia.  While this verse was speaking specifically regarding the procedures in the congregation, the Word also says that He is not a God of disorder, but of peace.  We can agree that that means that He is not a God who wants disorder in His children at any time–not in the congregation nor in the mind of each of His beloved children.

Looking at it another way, if you do not have peace, then you are not in touch with the God of peace.  You are missing something, as the Lord is a God of peace, not disorder.

So when people admonish us to greater success in getting over OCD, when they tell us, as I am, that this is something you can control, do not react in anger.  I know I did, and I feel foolish for it.  I was not even thinking clearly about what glass to drink out of, how could I possibly think that my thinking was rational, and that everyone else was wrong?

Be patient with others, but also be firm with yourself.  It is time for you to stop thinking of this as something that just has to happen because you have a disorder.  It doesn’t “just happen”; it’s is a build up of many factors, most of which, if not all, are under your control.  It is a constant “cluttering” of your brain with fearful, disordered thoughts.  Because, as we established in the Introduction section, you can control your thoughts.  That means that you can make your thoughts ordered, logical, praising, noble, good.  The Lord, your Lord, is not a god of disorder.  He is the God of peace.  You can do this.

Don’t get mad, get busy!